As I research my next book, I’ve been reading up on Jesus’ Hebraic, Jewish culture and how it contrasts with the Western culture in which we live. I keep bumping into great books I haven’t seen before. I thought I’d share a couple that are free to read or download because they are out of copyright. 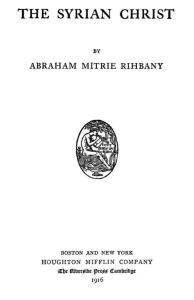 If you liked Ken Bailey’s books about Jesus through Middle Eastern Eyes, here’s a free ebook that you’ll enjoy. Rihbany shares oodles of insights on the gospels from a Middle Eastern perspective from living a lifetime in Lebanon. (Bailey quotes from this book.)

Rihbany wrote this book in 1916, so it’s a bit outdated – read it with a grain of salt. But it has lots of little “ah-hahs” for your next Bible study discussion.

Read/Download The Syrian Christ at this link.

The Influence of Greek Ideas and Usages Upon the Christian Church 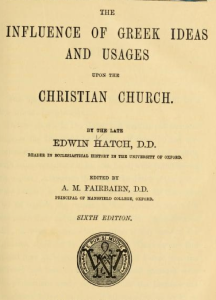 Here’s how this provocative book begins:

It is impossible for anyone, whether he be a student of history or not, to fail to notice a difference of both form and content between the Sermon on the Mount and the Nicene Creed… The one belongs to a world of Syrian peasants, the other to a world of Greek philosophers.

Hatch then goes on to explains how Christianity interacted with the Greek world as the church grew and often absorbed its ideas, sometimes to its detriment. Hatch was an eminent scholar who died shortly before this book was published in 1888. If you’ve studied the Septuagint (Greek Old Testament), you’ve likely used his massive concordance.

I thought this book was balanced, scholarly, but quite readable. And free!

Read/Download The Influence of Greek Ideas at this link.