In the past week, Jesus’ parable of the builder has been played out in living color right before my eyes:

I will show you what he is like who comes to me and hears my words and puts them into practice. He is like a man building a house, who dug down deep and laid the foundation on rock. When the floods came, the torrent struck that house but could not shake it, because it was well built. But the one who hears my words and does not put them into practice is like a man who built a house on the ground without a foundation. The moment the torrent struck that house, it collapsed and its destruction was complete. (Luke 6:47-49)

A little over a week ago, on June 19th, my town of Holland, Michigan was hit with over 7 inches of rain in one night. Roads were washed away, trees came down, the electricity went off. Kayakers paddled down the street next to mine. My little house was among hundreds whose basements were swamped with 2-3 feet or more of water. For several days I filled a huge dumpster with the soggy former contents of my basement — see below. (If you’re wondering why I haven’t written much lately, this is part of the reason.) 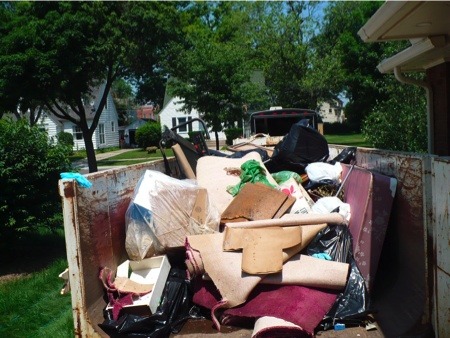 I think God must have a sense of humor, because I was meditating on this passage the week before the fateful flood came. I’ve had some water in my basement before. Usually I sop it up with the wet vac and run the dehumidifier, and then I forget about it once it’s dried up. I don’t have a lot of shop skills or homeowner how-to, so I let more extensive improvements go.

But now I’ve been meditating on Jesus’ words about how the wise builder built his house. He didn’t go cheap with materials or time or effort for building. And that was because he knew the truth that it wasn’t just about “if” the floods might come, it was just a matter of time of when the floods would come. He’d spend $1000 on installing a sump pump when he’d rather get a flat-screen TV. He’d know without some extra money and time up front, it was inevitable that cardboard boxes on his basement floor would be soaking up filthy water.

But the thing I’m focusing on is not my house, but the main point of this parable. Jesus is talking about putting his words into action, and not just hearing them. He wants us to live out his instructions, not just study them academically, or even write books about them.

What does this look like? One thought that comes to me right now is “love your neighbor.” When we’re all standing out in our driveways sorting our possessions, I’ve been seeing a lot of my neighbors. How can I do these words, and not just hear them?

I heard a great line recently: Who you are as a neighbor is who you are as a person. You don’t choose your neighbors, and you often have to put up with people you don’t care to interact with. Do I befriend the college kids behind me, or just call the police when they have a loud party? Do I mow the shaggy lawn of the single mom next door, or simply grumble about why she can’t get her act together? Do I connect only with neighbors with good jobs, hoping that they’ll stay and improve their houses and drive up my property values?

After all of this, I’ve learned the wisdom of putting in drain valves and eavestroughs and sump pumps. My house might not flood, but I won’t really be rebuilding on the best foundation until I start loving my neighbors by helping them haul stuff out of their moldy basements too.