As I research my next book, I’ve been reading up on Jesus’ Hebraic, Jewish culture and how it contrasts with the Western culture in which we live. I keep bumping into great books I haven’t seen before. I thought I’d share a couple that are free to read or download because they are out of […]

I recently told you about some of the interesting Norwegian words I grew up saying, like “uff-da” and “vasakope.” As my immigrant ancestors were learning English, they hung on to words in their mother tongue that did a better job of expressing what they meant to say. My relatives weren’t the only ones doing this. […] 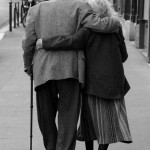 Hebrew has a word for life-long love that is richer and deeper than English has ever conceived of—hesed (HEH-sed). Based in a covenantal relationship, hesed is a steadfast, rock-solid faithfulness that endures to eternity: “Though the mountains be shaken and the hills be removed, yet my unfailing love (hesed) for you will not be shaken” […]