I am a woman and I write about the Bible.

I’m often asked, “Lois, why don’t you write more about women’s perspective on the Bible?” You might be surprised, but over the years I’ve specifically avoided women’s issues. I’ve written several books now about Jesus’ Jewish context, Hebrew words and every sort of other contextual insight I find regarding the Bible. Why not this one topic that my audience might want to hear about most?

You’ll find a clue in this blog post that I bumped into some years ago entitled, “Where are all the women? What my bookshelf says about the continuing effects of patriarchy.” The pastor-blogger had put a picture of his bookshelf into his blog, which inspired his lament. 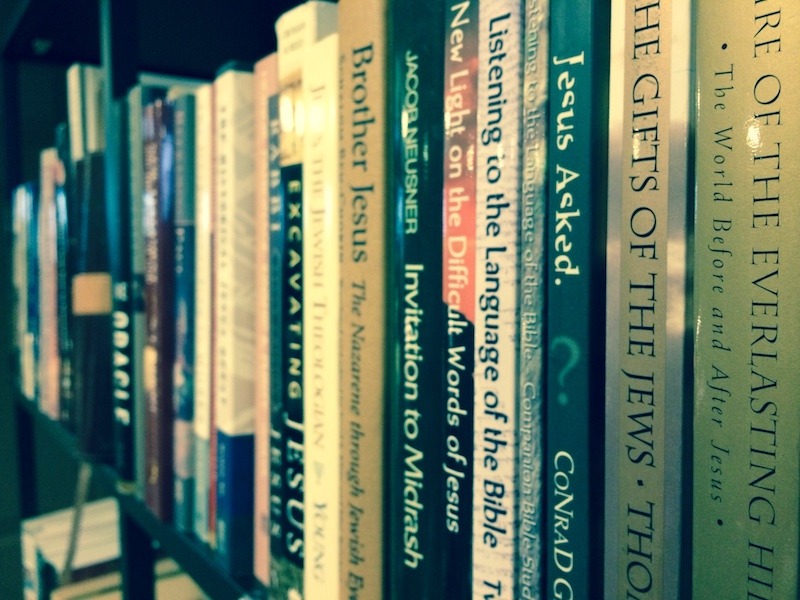 I got a big laugh because prominently displayed on his woefully patriarchal shelf are three books that I wrote or edited.1 The pastor then dutifully repents by sharing a long list of women authors that he recommended. Ironically, nowhere on his list is my name.

It appears that I simply didn’t qualify as a “woman author” to him because I deliberately avoid sprinkling my writing with my “womanly perspective.”

Why have I been doing this?

Why to I do this? If I want to sell my books, this approach is likely costing me publicity opportunities. Female bloggers who have played it up have gone viral and gotten a lot of attention. Despite the temptation, I refuse to play this card. I simply won’t let myself get pulled into a lot of social media argumentation despite the publicity it might generate.

One of the most significant reasons why I’ve avoided the “woman author” approach is from my training. The place I began doing study and research was in the laboratory. I got my Ph. D. studying the regulation of an obscure calcium-regulating hormone called calcitonin. No one cares about calcitonin from a “women’s perspective.”

In the sciences, no one looks for a researcher who can provide a “feminine” or “masculine” perspective on their data. The only thing that investigators want to know is if a scientist’s insights accurately and objectively describe what the data is doing. Only a really bad researcher starts out with a pet theory that tempts them to press their results toward their own predetermined conclusions. That’s what tends to happen when you read every Bible text searching for a “women’s perspective.” You get too enamored with your own cause.

Besides, I am deeply convinced that the Bible contains the very thoughts of a loving God who has powerfully spoken into human history, even when a “women’s perspective” is not apparent. I simply don’t need to find the biblical text cheering for women in every place.  Uncovering what the original says is critical, the only goal I can have. Ultimately God’s love will shine forth.

I encounter women authors who don’t sound like they are convinced of this. Some even sound like they are horrified by how an offensive, outmoded religious text has influenced the world, and their mission is to replace it with more enlightened ideas of their own. If that means that they’ve given up on the idea that a loving God has actually spoken through this ancient text, I feel sorry for the hopeless place they are in.

At the same time, I’ve been encountering a growing number of female “Bible nerds” who love to dig into ancient texts and obscure sources. Can I give you some advice? Resist the desire to follow a soppy kerchief toward your favorite women’s “cause.” Dab your lashes, don your big-girl pants and start investigating something that is not specifically a “woman’s interest.”

Develop study habits that allow you to discuss multiple viewpoints on a biblical text and learn to avoid choosing a “spin” because it supports your cause. You might find more men influenced by your writing, not because they’ve abandoned all sexism, but because your insights don’t sound like they have an agenda-driven approach that disallows any kind of objective reading.

We all are weary of the endless polarization we’ve experienced these past few years. I’d like to suggest that the gender-neutral approach that I’ve adopted can have a place in this discussion. I think it can be quite valuable and useful, especially in this time and space.

1 On the shelf are Listening to the Language of the Bible and its study guide, as well as New Light on the Difficult Words of Jesus, which I worked on with David Bivin.