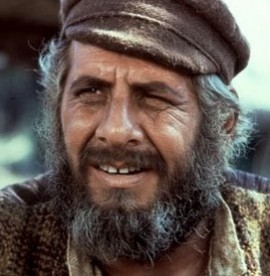 Remember in Fiddler on the Roof how comfortable Tevya was saying what was on his mind to God, no matter what? Like, when his horse injured his foot he said,

“Dear God, was that necessary? Did you have to make him lame just before the Sabbath? That wasn’t nice. It’s enough you pick on me. Bless me with five daughters, a life of poverty, that’s all right. But what have you got against my horse? Really, sometimes I think, when things are too quiet up there, you say to yourself, ‘Let’s see, what kind of mischief can I play on my friend, Tevye? ‘“

You have to admit that Christian prayer seems distant and formal in comparison. But is this how Jews really pray, or is this just Hollywood? This week I found some quotes from some rabbis who sound a lot like Tevya:

(Note: “Hashem” is a substitute for God’s name.)

“Hashem, the law is that a person may not strike his grown son, lest the son strike back and be guilty of a capital offense. Similarly, do not afflict us, Hashem, with afflictions that we are unable to withstand, so that we strike back at you and incur retribution.”

On a bitterly cold morning, a rabbi looked out and saw a Jewish man hurrying through the wind and snow carrying his tallit (prayer shawl) and tefillin (phylacteries) to attend morning prayers at the synagogue. The rabbi exclaimed, “Hashem, you can see how Jews go out in the most extreme weather just to pray to you. How can you have any complaints against the Jewish people?”

(From the book, Wisdom & Wit: A Sparkling Treasury of Jewish Anecdotes and Advice, by Shmuel Himelstein, Artscroll, 2003).