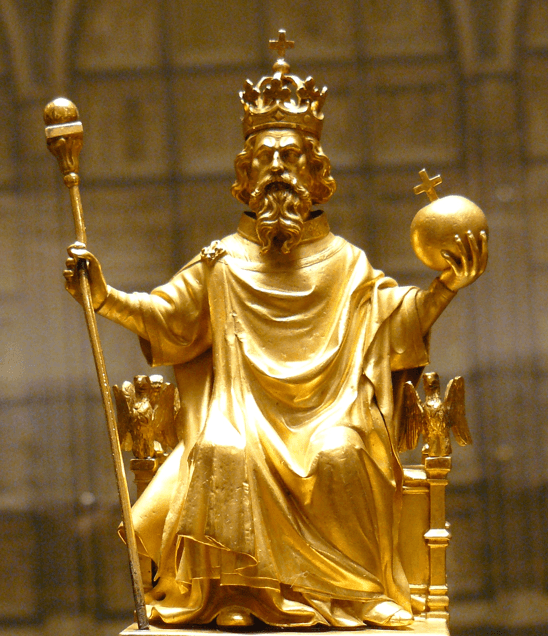 The title “Christ” or “Messiah” refers to God’s “anointed one.” Overall, the prophetic imagery is that of a king, although prophets and priests were anointed too. (For more, see What does “Christ” Actually Mean?)

In our modern world it’s hard to grasp what awe and worship kings inspired, and why Israel desired one so much.

I found it fascinating to read a description of the Messianic King by an orthodox rabbi, Nosson Scherman, which I’ve put below. I’m guessing that the rabbi derives some of his ideas from Scripture, some from Jewish tradition, and some from how kings like David and Solomon functioned in the ancient world.

Knowing that Jews and Christians disagree about the Messiah in many ways, I didn’t expect to agree with all of it. But what I found surprising was how it actually did sound like Jesus in ways I never thought of. Take a look:

The ideal Jewish king ascends his throne in a time of tranquility. The nation is secure and prosperous because its ultimate King, God, has made it so, and its way of life is charted by the Torah. The king plays a unique role. He, as first citizen of the nation, is the living embodiment of Torah and how its statutes and holiness ennoble man.

Holder of immense and almost unbridled power, he submits to the laws in the book of Torah which he carries with him at all times; required by his duty to the nation to hold wealth and exhibit pomp, he acquires what he must, but shuns excess; enabled by his station to indulge his passions, he sets an example of sobriety and self-control; inhibited by no mortal restraint, he turns his energies to the selfless service of his people; able to establish the absolute dominion of his own will, he does not rest until his people know the rigors of Torah study and a discipline of honesty and morality in their personal and business lives that would earn sainthood in any other nation.

It is the function of the king to safeguard the Torah and see to it that the people study it and obey its commandments. Nor is he to be considered above the Halacha [law] — on the contrary, it is his duty to be a model of scrupulous adherence to the laws of the Torah. His office, however, carries with it a unique legal status which may be divided into two categories:

a) As the sovereign embodiment of the nation, the king is entitled to respect and reverence exceeding anyone else’s. All must step aside to make way for him and even property may be destroyed for his convenience. Nor may the king voluntarily forfeit any of his prerogatives; to do so is to demean the nation he leads. He is as obligated to exercise his claim upon the awe of the nation as is each of its members to grant it.

b) The king has extra-legal powers to confiscate, punish, and condemn to execution. A Jewish court of law may not execute a murderer save under a set of extraordinarily strict rules of evidence and testimony; a king may have the murderer killed, so long as he is satisfied that sufficient proof of guilt exists, even if the evidence is circumstantial. Whoever is disrespectful or defiant of the king is liable to the death penalty upon his command and at his pleasure. All this is to insure that he has the power to inspire the fear of, and destroy the capacity of evil-doers. In the exercise of his extra-legal powers, the king is guided by one consideration – to correct any situation, as required by the times.

Okay, this might be a little challenging for some readers. But what are your thoughts about how the Messianic imagery here relates (or doesn’t relate) to the Christ you find in the New Testament?