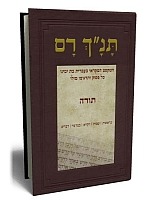 A few months ago I wrote an article called, “Translation Debates – A Jewish View.” I noted that Christians often get into heated debates over translations. Many have sparred over the “KJV-only debate” and the inclusive language in the TNIV.  Surprisingly, I’ve almost never heard this kind of discussion among Jews.

The reason why is that only one Scripture text is understood to be authoritative and it’s the original Hebrew (Masoretic) text. English translations simply don’t get a lot of debate, because everyone knows they are a crutch for those who can’t read the real thing. As rabbis preach, they often translate on the fly rather than quoting from one authoritative English version.

This morning I read my first Jewish translation debate. For the first time, someone published a different Hebrew version of the Scriptures. It’s called the Tanach Ram, and it’s a simplified text in Modern Hebrew. Modern Hebrew isn’t that far away from Biblical Hebrew – 80% of the vocabulary is actually the same. But to Israelis, the Bible’s wording sounds archaic, like Shakespeare or Chaucer.

In order to make the Bible accessible, the editor recast its words and phrases in the language of Israelis today. Sometimes he just smoothed out Hebrew that was already quite understandable. For instance, Genesis 1:1 says that God created the “world” rather than that he created the “heavens and the earth.”

Critics of the text call it “a disaster of biblical proportions.” The version has been banned in schools. The text distances readers from the Scriptures by replacing the original with an interpretation, they say. But others say that the text draws people closer to the Bible by making it accessible.

Hmm… It sounds like they’re having the same discussion that Christians have had over the years.

You can read more at these links:

Forward Magazine – From Hebrew to Hebrew