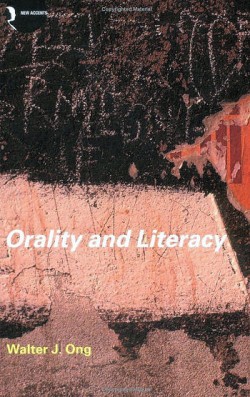 In Walter Ong’s classic book Orality and Literacy, he shares a fascinating theory about why our modern Western culture thinks so differently than the way the Bible does.

Eastern thinking, like what you find in the Old Testament, is very concrete and image-oriented, and it uses stories and parables to explain rather than abstract logic. It is relational and group-oriented rather than individualistic, and it focuses on action rather than internalized belief. If you read the articles at engediresourcecenter.com, you know that you miss a lot of the most important truths of the Bible if you don’t understand the way it thinks.

Ong describes studies done in cultures which have never had a written language, and he finds that they tend to be of the mindset that we call “Eastern.” Learning is always by direct experience, or by relationship, or by stories told within the family. One learns cooking or hunting by being with another who knows the skill, never from a book. Knowledge is never a disembodied group of facts – it always is concrete and comes from ones senses, and other people. 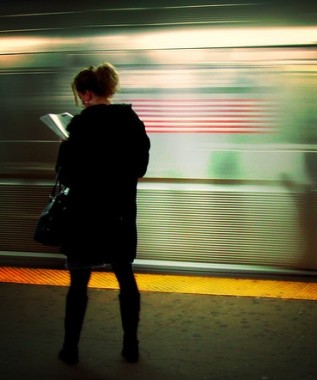 When a culture becomes deeply literate and relies almost completely on reading as the medium for passing on knowledge, people’s patterns of thought change. Think about what happens in the process of reading: You interact with an set of abstract characters and mentally reconstruct what the text means. You forget about the person who wrote the text and focus only on the concepts in your mind. You also don’t interact with anyone else, and in fact you really can’t while reading. Through this process you are acquiring the mental habits of individualism, abstract thinking and internalization – all characteristics of the Western mind.

Ong theorizes that the origin of the difference in Western thinking comes from the rise of literacy in Greece in ancient times. He points out that oral communication is universal among humans, but writing is a fairly recent invention. And he says that the invention of a completely abstract, phonetic alphabet only happened once in human history, in ancient Greece. Other languages had an alphabet, but oral information was still necessary. For instance, ancient Hebrew has no vowels, so readers needed to hear a text orally from someone who knew it.

Cultures outside the West adopted the Greek alphabet-based writing system, but many retained much more of their oral transmission style. This means that the biblical, Hebraic pattern of thought is actually the more universal pattern – it is us that have changed and moved away from it! Africans, Asians and Native Americans all say that the Eastern way of thinking is much closer to the way that they think. Of course they are literate cultures, but they have internalized its patterns of thought less than ours has.

We have a hard time imagining that an oral culture isn’t hopelessly backward. To us the word “illiterate” is synonymous with total ignorance, and we teach our children to read as soon as we can. But when literacy was first becoming common in ancient Greece, philosophers like Plato considered it a crutch for the weak-minded that would lead to people’s widespread ignorance and loss of memory. (Remember how when calculators came out, we saw them as a crutch that would rob people of the ability to do math?) 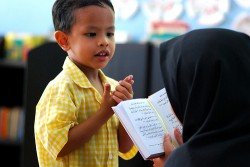 In fact, many oral cultures the emphasis is on learning by memory, and they were quite skilled at this. In Jesus’ time, it is likely that boys memorized the Torah and much of the Scriptures by heart. Still today there is a strong emphasis on memorization among Orthodox Jews. This is why Jesus’ teaching was peppered with brief allusions to the Scriptures—he assumed his audience knew it all by heart, so the smallest of reference was all he needed. Rabbis still do this today.

Also, much of rabbinic commentary is done by linking together passages, noticing that one rare word is found in two important places. For instance, ve’ahavta (and you shall love) is found in Deuteronomy 6:5 – “And you shall love the Lord your God” and also in Leviticus 19:18 – “You shall love your neighbor as yourself.” Jewish thinkers before Jesus had connected the two passages because one passage reminded them of the other as they as they recited the words. When you have it all memorized, this is easy and obvious, but if you don’t, it’s not something you’d ever guess.

Of course there are enormous advantages in literacy – you can communicate at a distance and learn from others than those directly around you. You can construct lengthy, complex chains of reasoning that you couldn’t without something to write it down as you go. Despite the advantages of literacy, I wonder if our loss of memory has disconnected us with Jesus too.