One busy afternoon in the summer of 2004, a bulldozer rumbled onto a lonely side street in Jerusalem and began to push aside mounds of dirt to unearth a broken water main. With a grinding clunk the machine collided with an object buried below.

As the soil was brushed away, an obviously ancient plastered step emerged. Within an hour archaeologists were on the scene, the word “bulldozer” hurrying them over to this potentially valuable site. Excavation revealed several more long steps down one side of an enormous rectangular pool. 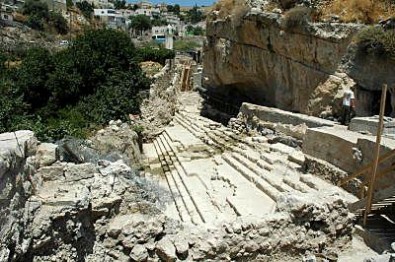 Over the next months one of the most important finds in history emerged – the Pool of Siloam. This is where Jesus sent the man born blind to wash the mud from his eyes, emerging from the water with sight he had never had before. This is also where priests with golden pitchers came to draw water during Sukkot. It is the source of water that was offered on the alter that fateful year when Jesus proclaimed that we should come unto him to drink.

In the fourth century, Queen Helene of Constantinople journeyed to Jerusalem with her entourage in a holy quest to enshrine every place mentioned in the Gospels. Some of the most important historical sites were entombed by massive churches, the land blighted with her monuments. But the queen walked right past this site, declaring a diminutive pool a few hundred yards away to be the Pool of Siloam. The real pool was spared her religious zeal.

How could she miss such a enormous site? Because of the properties of living water. The Pool of Siloam fell into disuse when the Romans destroyed Jerusalem in 70 AD, and weeds started sprouting in the puddles in the bottom. Within only a few centuries the plant life had decayed into rich soil, and the area filled in by in several feet. By her time, only a few hundred years after Christ, the pool had turned into a lush oasis.

Today only a portion of the Pool of Siloam has been unearthed, because the rest is under the property of a nearby Greek Orthodox church. But even without digging another shovelful you can tell where the far edge of the pool lies. In late summer when everything is dry, one green patch has stuck out for centuries in aerial views of Jerusalem, mysteriously moist and lush when everything around it is brown. Here figs, pomegranates, cabbages and other fruits have flourished happily when everything else has withered away. Underneath the soil the plastered remains of the Pool of Siloam are still there, holding the rains and spring water from percolating away. All these centuries, living water has been flowing down here, and bounteous fruit has been the result.

The Pool of Siloam is a perfect illustration of a promise God made: “If you spend yourselves in behalf of the hungry and satisfy the needs of the oppressed… the LORD will guide you always; he will satisfy your needs in a sun-scorched land and will strengthen your frame. You will be like a well-watered garden, like a spring whose waters never fail.” (Isaiah 58:10, 11)

In the same way, God’s Spirit may flow hidden deep beneath the surface of our lives for years. But if we’re sensitive to the God’s compassion for those who are hurting, and obedient to his urgings to care for others, abundant fruit is inevitable. Our life will become a lush oasis that brings refreshment to all around. 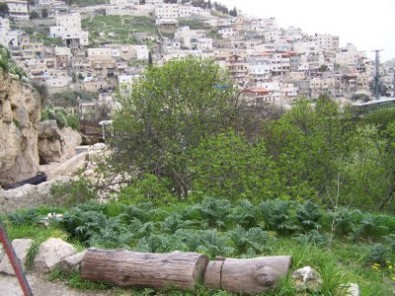 (For more on the discovery of the Pool of Siloam, go to this link.)