Right now it is the Advent season, and we’re supposed to reflect on what it was like to anticipate Christ’s first coming. In my reading, recently I bumped into something that really got me thinking. 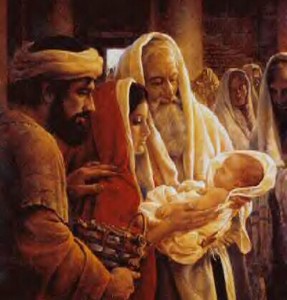 One thing I had always wondered about was a theme that you find in the prayers that surround Jesus’ birth. In Zechariah’s song, he rejoices that God has raised up someone who will bring “salvation from our enemies and from the hand of all who hate us” (Lk 1:71). Who is Zechariah talking about who hates them? Why was Simeon “waiting for the consolation of Israel” (Lk 2:25)? They seem to have some great anxiety, and seem to be imploring God to save them from a great enemy. What was going on around them?

The Brutality of Rome

Let’s find out a little more of the history of the time. Remember Herod’s massacre of the infants around Bethlehem? (Mt 2:16) I used to read that as an isolated tragedy, but it actually was typical of the great brutality of Herod and the Romans.

I was especially struck by an incident that happened near Sepphoris, a city just a stone’s throw from Nazareth. If you’ve visited Israel, most likely you’ve walked through its amazing ruins. Scholars say that it’s quite likely Jesus and Joseph walked there each morning and worked in the city because it was so close.

In 4 BC, almost exactly the time of Jesus’ birth, an uprising occurred in Sepphoris.  The Roman responded by scouring the countryside, rounding up two thousand rebels who were crucified. They swept through many of the towns, killing and destroying everything in sight. Sepphoris was burned to the ground, all its surviving inhabitants sold into slavery.

Just imagine, Jesus’ own hands may have chiseled some of the stones that rebuilt Sepphoris. He must have had family friends that told shocking stories of the cruel deaths of their relatives. In his adult ministry, he may have even healed some of their lingering wounds.

A Crisis of Faith

For some reason, as I heard about the events of the first advent again I was newly sensitized to the great anguish of Jesus’ people. For a while I’d gotten used to hearing about all the Roman cruelty, and it seemed almost fictional. But then I read James Carroll liken the Roman Empire to to the Nazis, referring to it as a “totalitarian regime.” He comments that “Jesus and his movement were born in the shadow of what would stand as the most grievous violence against the Jewish people until Hitler’s attempt at a Final Solution.” (Constantine’s Sword, Mariner 2002, pp. 78, 80) He pointed out that there really was no time in Jewish history that they suffered so much as the first century, outside of the Holocaust. And Jews have suffered a lot over history.

It was really a crisis of faith for them, because in the Old Testament Israel was punished when it wandered from God. But in Jesus’ time, the most pious were the ones that suffered the most. About a century before Christ, Greeks tortured and killed Jews for reading the Torah and circumcising their children. Horrors like this continued to occur in his time. In Luke 13, some Galileans report that worshipers who had come to the Temple had been murdered, their blood mixed with their own sacrifices. I can hardly imagine their outrage.

Grasping this reality sheds light on the groups of people around Jesus, because society was deeply divided by this crisis. The Zealots felt that God wanted them to fight for their freedom, to serve him rather than foreign gods. The Sadducees were wealthy priests who controlled the Temple, who had given up the idea that God would come to their rescue. They, in fact, had sold out to the Romans and were getting wealthy by stealing the tithed money from the Temple.

In reaction to the Temple’s corruption, the Essenes abandoned worship there and had secluded themselves to live lives of great ceremonial purity. They were waiting for the day when God would send the Messianic “Teacher of Righteousness” who would call them as the “Sons of Light” to battle the “Sons of Darkness,” which, in their minds, were pretty much everyone else.

Many of the common people, like Jesus’ family and Simeon and Anna, concluded that their best hope for the future lay in prayer and careful obedience to God’s word. A popular movement grew up of laypeople who wanted to study together in their own towns, rather than only worshiping in the Temple. The leaders of this movement were the Pharisees, who were common laborers who distinguished themselves by their devotion to study.

You can imagine that at times they might get a little excessive, because they felt like their nation’s life depended on their obedience and piety. But ultimately, Jesus was closest to their way of thinking. And you can imagine how strong people’s feelings were at that time. In times of war, emotions run very high.

Wow. All of a sudden I see why people were longing for a redeemer. And as many times as I’ve piously said, “they were wrong to want a political savior,” I now have great empathy for why they did. Jesus lived in a world as evil as anything in our modern reality, and God sent him right into the middle of the depths of their darkness.