What wisdom can we learn from Abraham, the man whom God chose to make a covenant to bless the world? The rabbis were delightfully sensitive to little details in each biblical story, and their favorite stories were those of the patriarchs — Abraham, Isaac and Jacob — who they considered superheroes of faith. Certainly, they thought, we can learn from them how to live.

Listen to what they found in the story of Abraham and his heavenly visitors in Genesis 18. When three strangers came to Abraham’s door he said, “Let a little water be brought, and then you may all wash your feet and rest under this tree. Let me get you something to eat, so you can be refreshed and then go on your way—now that you have come to your servant” (vs. 4-5). 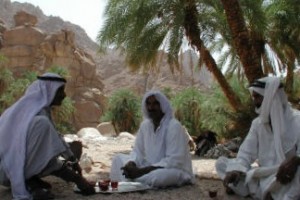 But then he told Sarah to kneed three seahs (about 25 quarts!) of their finest flour into bread. He next ran out to his herd and chose one of his best calves, choice and tender, and found a servant to prepare it. And then he brought some curds and fresh milk too. It would have taken most of a day to prepare this luscious feast. The bread would need to rise, and the calf would need to roast for hours. I think there would have been enough food for fifty people or more.

Abraham had no idea who these strangers were who came to his door, and all he promised them was a little water and just a bite to eat to tide them over for their trip. But instead, he rolled out the red carpet and prepared a luxurious feast for them. Wow.

The great rabbi Shammai (who lived about fifty years before Jesus) shared an excellent comment on how to live by Abraham’s example: “Say little, do much.” (Pirke Avot 1:15) A later rabbi added, “What does this mean? It teaches that the righteous say little and do much, whereas the wicked say much and do not even a little.” (Avot d’Rabbi Natan 13:3)

Jesus said a similar thing when he told the parable about the two sons in Matthew 21.

What do you think? There was a man who had two sons. He went to the first and said, ‘Son, go and work today in the vineyard.’  ‘I will not,’ he answered, but later he changed his mind and went. Then the father went to the other son and said the same thing. He answered, ‘I will, sir,’ but he did not go. Which of the two did what his father wanted? (Mt 21:28-3)

One son had the shocking chutzpah to say “no” to his father, something a son didn’t do back in those days! But then he went and did what he was told. The other respectfully said, “Yes, sir!” And then he didn’t actually do what he was supposed to.

I’ve been feeling convicted about this in my own life recently because for various reasons, I’ve said that I’d do things and then had to back out of them. Or I forgot my words in the midst of the other things that became important later. Or I’ve simply changed my mind. If I have a good reason, I apologize and usually people forgive me. If I forget, it just doesn’t get done, and in my mind I think, “Well it must not have been too important — maybe the other person won’t mind.”

Then I remembered one friend who made some exciting plans with me. I was very enthusiastic about what we’d do together, but then he canceled out later. Then he did it more than once! I admit that I was irritated at him for years. It wasn’t until that I saw myself in him that I got over my anger. In his mind he genuinely wanted to do the thing he promised when he made the promise, just like I did. We were both a bundle of good intentions! But good intentions aren’t the same as follow-through.

As much as I see this lack-of-follow-through in myself, it seems to be a common trait among us nowadays. I wonder if it isn’t part of our easy-going American culture. I read a booklet for new international students that warned of them of this tendency: ”When Americans tell you, ‘We will have you over to our house for supper some time’, don’t be disappointed if they don’t invite you the next week. They may not ever invite you, in fact. This is just their way of voicing their general feelings of welcome.”

Ouch. I imagine that this advice came out of the experience of many an international student who felt crushed and angry when their phone didn’t ring. I may have even issued some of those “mock invitations” myself.

As it says in Proverbs 25:14, Like clouds and wind without rain is a man who boasts of gifts he does not give.

In the future, I am making an effort to live by Shammai’s words: Say little, and do much.