Have you seen the news that evidence for the lost city of Bethsaida has been found? USA Today, Newsweek, National Geographic and the Today Show have all reported on it.

I’m pinching myself. A student from my area took part in the dig, and I was there myself for a few days.

Bethsaida, you may recall, was one of the most important sites in the New Testament. It was where Jesus healed a man born blind (Mark 8:22), and near where he fed the five thousand (Luke 9:10-17). John 1:44 says that it was the birthplace of Peter, Philip and Andrew.

Yet the actual location of this village has been debated over the years. If you’ve toured Israel, you may have seen an archeological dig that is labeled as “Bethsaida,” but it is over a mile from the Sea of Galilee and contains few remains from the first century. This has led scholars to doubt that it was the fishing village mentioned in the New Testament.(1)

Other promising sites for Bethsaida have remained unexplored. One of them, a ruin near the Sea of Galilee called “El Araj” by local Arabs, is a particularly good candidate because it is much closer to the shoreline, something you would expect for a fishing village. 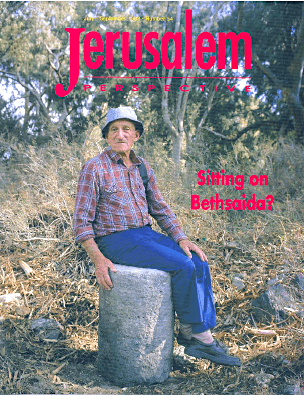 In 1998, Sea of Galilee expert Mendel Nun published his analysis of the various sites and his conclusion that El Araj is the more likely spot in the article, “Has the Lost City of Bethsaida Finally Been Found?” in Jerusalem Perspective.

Part of his reasoning was that several ornate stones that were used in ancient synagogues had been found there. This strongly suggests that a Jewish village once existed at this site. On the magazine cover, he’s sitting on a segment of a column.

Despite its promise, El Araj was left unexcavated for another eighteen years.

Finally, in the summer of 2016 the exploration of El Araj commenced. Led by historical geographer Steven Notley and archaeologist Mordechai Aviam, the team found suggestive clues in their very first season. These included a large bronze vessel from the Roman period and gilded mosaic tiles typically used in ornate churches. Early churches were often built on important biblical locations.

The dig continued this past summer, June 30-July 14. (I invited you to join them back in March — see this post.)

I was itching to see what was going on myself, so I volunteered to travel with a high school student from my area who wanted to participate. I joined the group for a couple days too.

So, here’s my on-the-ground report.

A little background for non-archeologist readers: This is what the site looked like on the first day, before they started digging this season. 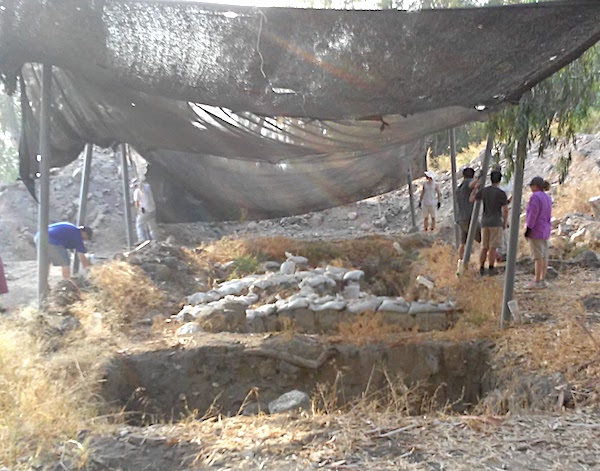 Each day the team would carefully remove layers of soil from a 4×4 meter square and catalog what they found and record it on a grid. Often they would sift for small artifacts. 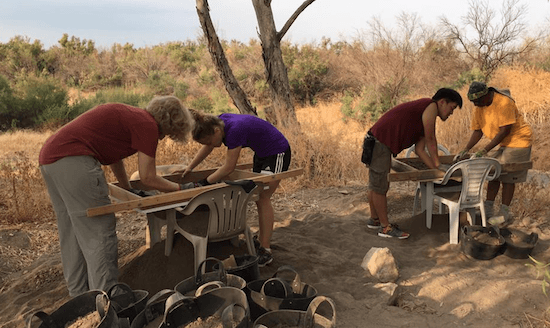 They worked in the morning (6 AM to 1 PM) to avoid the heat. In the late afternoon they’d gather with the archeologist to examine the pottery they had found that day and discuss their findings. 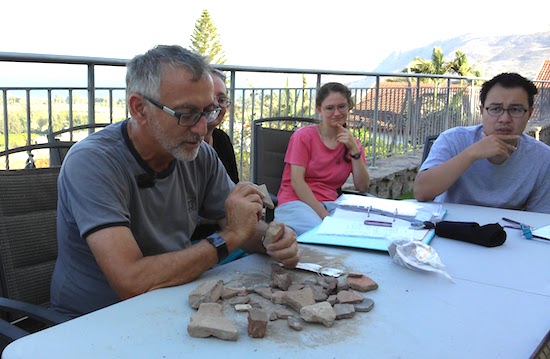 I came with the team on the first day and helped them prepare the site, not expecting to find anything. But even that one day when I was with them, I was amazed at the number of ancient objects that were littered about.

As we swept, the top of a limestone column peeked out of the ground. Then I picked up a cube-shaped mosaic tile. A few minutes later, my student-friend Natalie Vredevoogd unearthed some fragments of ancient glass.

This was par for the course. Every day the team unearthed pottery, coins and artifacts, fascinating evidence of human habitation down through the centuries.

Natalie spent most of her time working on a square where they had found a sugar cane processing facility from the Crusader period (12th century). On that level they found many large bowls used to boil and extract sugar.

Below that layer she worked on unearthing remains from the Byzantine period (4th-7th century).

Evidence of a First Century Village 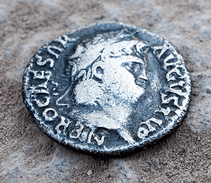 In one area, the team dug down into the level of the Roman period (1st-3rd century). There, they found pottery and dozens of coins. This one is from 65-66 AD. The image is that of Nero, and the inscription reads, NEROCAESAR AUGUSTUS.

This pottery fragment is also from the Roman period. 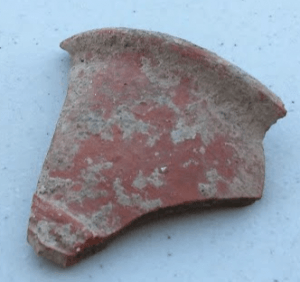 The most important discovery was a wall and floor of a Roman structure that contained a mosaic, along with some clay tubules used to pipe hot water. This led them to conclude that they had discovered a bathhouse from the Roman period.

You wouldn’t think you’d find a fancy bathhouse in a humble fishing village, but the historian Josephus reported that around 30 AD the Romans decided to “upgrade” Bethsaida by building it into a Roman polis that they named “Julias.” So, if you are looking for Bethsaida, you’d expect to find Julias, the Roman city that it later became.

Here, the mosaic is just emerging as it is being cleaned. It has a black and white “meander” pattern reminiscent of what has been found at Magdala.

The presence of a bathhouse floor is very suggestive that a wealthy Roman village once was there, quite possibly Bethsaida/Julias. As careful scholars, however, Notley and Aviam are not positively identifying this site without uncovering more of the remains. (News reports tend to overstate their claims.) Overall, the team was overjoyed that they had discovered a first-century village, most all of which is still not yet uncovered.

One other detail about the Roman mosaic floor was significant. It was several feet below the level where the seashore was thought to be in the first century. This implies that the Sea of Galilee was lower than once thought, which impacts the overall geography of the area. The map in the back of your Bible may need to be adjusted!

In the video below, Mordechai Aviam explained to CBN News what they found and its significance.

(Unmute it in the right lower corner.)

At the end of the two-week dig I returned to visit with David Bivin, editor of Jerusalem Perspective, who had surveyed the site with Mendel Nun and published his report twenty years earlier. He conferred with Notley and Aviam about their findings. 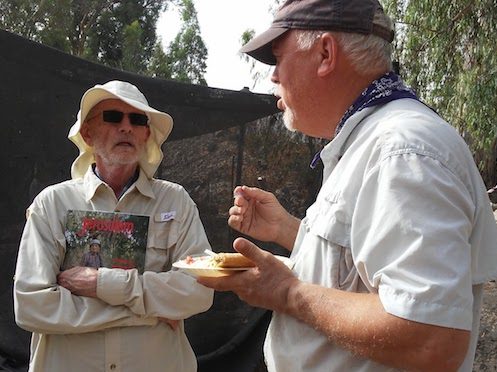 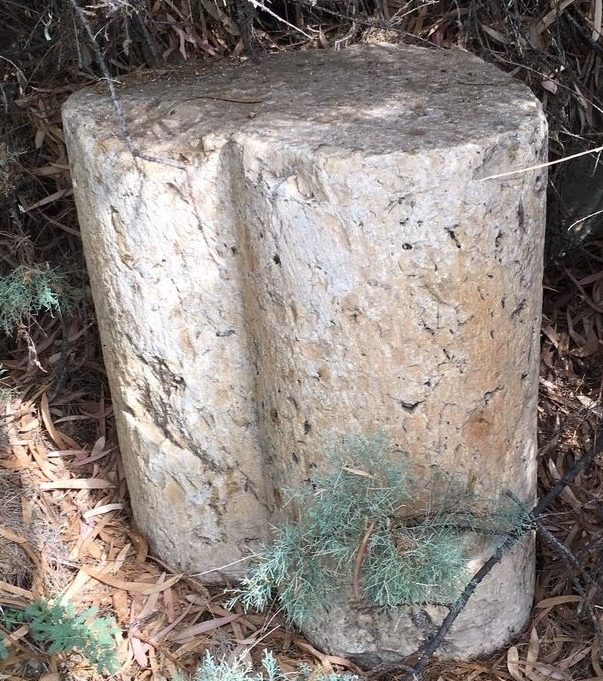 One thing I noticed as I looked around was the heart-shaped column section that Mendel Nun had been sitting on decades ago.

More Work to Do!

As exciting as these findings are, the work here is only beginning. This ancient site has only begun to be exposed at the first-century level. Whatever lies below was certainly there when Jesus preached on these shores.

And yes, you can join them! For more information, see the end of this post.

If you’d like to read the official report for this year’s excavation from the Center for Study of Ancient Judaism and Christian Origins, go to this link.

Also, check out this amazing time-lapse video of the excavation trip by Zachary Wong. This is very cool. It will make you want to come next year!

(1) See “Et Tell is Not Bethsaida” by Steven Notley in Near Eastern Archaeology (Vol. 70, No. 4 (Dec., 2007), pp. 220-230). Notley is the co-author of the widely-read atlas The Sacred Bridge (with Anson Rainey, Jerusalem: Carta, 2006) and Professor of New Testament and Christian Origins at Nyack College in New York.

(2) In 2018, the El-Araj dig is scheduled for June 15-29 (Session 1) and June 30-July 12 (Session 2). Follow the link to Emmaus Educational Services to learn more. According to all who went, it was a great learning experience. Along with college and graduate students, there were even a few retired people — you just need energy to dig and haul dirt for two weeks. Along with working at the site, participants heard lectures and took field trips to other sites (including Sepphoris, Banias and Omrit), where the scholars leading each excavation explained what they had found. 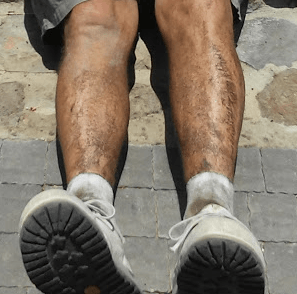 Post note: I found one thing quite amusing when I joined them that day. After all of the writing I’ve done about being in the “dust of Rabbi Jesus,” that was what we were doing quite literally! By the end of each day everyone was completely caked with dirt from where Jesus (likely) once walked.