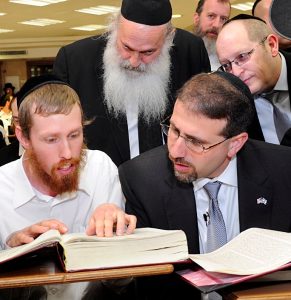 I recently was asked about how disciples studied with rabbis. What age were disciples, and did they pay the rabbi a fee to study? How did they support themselves at the same time? Did the rabbis work at some craft to support themselves? (They were not like rabbis of today, which like pastors are to paid to teach a congregation.)

This was my answer:

Boys attended school (which focused on studying the Scriptures) until age 13, and then typically learned a trade as an apprentice after that. Parents would start making arrangements for boys to do apprenticeships when they were young. After they finished school at 13, many would go and live with a tradesman’s family for a time, and they would earn their keep by doing chores and menial labor as they learned from the craftsman. Marriage was encouraged by about age 20.

The Mishnah says that the time that some began to attend the bet midrash (house of study) which was a rabbi’s “school” or “study group” was about 15. Adults of all ages could come to listen in on the sessions (including women) when they had spare time, and there were quite a few who studied but never became teachers – they were still called “disciples” even at advanced ages. There were just a few who were dedicated enough to spend years of time in training to become rabbinic teachers themselves.

Even though marriage was strongly encouraged, some young men were so earnest in their studies that they would put it off until later so that they could study full time. Gamaliel II (the grandson of Paul’s teacher) already had disciples when he finally got married. Paul and Jesus fit into this tradition of setting aside marriage for the sake of ministry. This was likely what Jesus meant about being “eunuchs for sake of the Kingdom of Heaven.”

Regarding fees – it was forbidden to charge a fee to teach the Torah, so it was common for rabbis to practice a trade part of the time and teach part of the time. Disciples did the same. Some rabbis were from priestly families, so they would have a stipend from the Temple, but many were manual laborers. There are many reports of teaching sessions held in the evening or on the Sabbath or festival days, so often men worked and studied at the same time. Some could work seasonally and take time off between planting and harvesting, etc. This makes sense with how the Gospel accounts describe the disciples fishing occasionally, even after they had become disciples of Jesus.

Women often helped run the family farm or manage its business, giving the husband time to study. (Think of Proverbs 31, where the wife ran the business, and the husband “sat in the gate” – either in government affairs or in intellectual discussions.) Proverbs, of course, is from an earlier time, but the same thing was true in later Judaism – in pious families, the wife often would earn the money so that the man could spend his time in religious study. Extended families would also support a brother or son who was engaged in study too.

Often disciples would travel together with a rabbi, and they would take weeks away to go on a teaching trip. A disciple had to ask his wife’s permission to be away from home to study longer than 30 days. When they traveled, rabbis and disciples would pool their money to buy food, etc. Jesus received contributions from wealthy women, and they were known for supporting other rabbis too. When they traveled, the villages they taught in were expected to extend hospitality, giving them food and shelter.

My reference here is the chapter, “Education and the Study of Torah” in The Jewish People in the First Century, by Safrai & Stern (Van Gorcum, Brill.) Shmuel Safrai spent a lifetime engaging the original rabbinic texts, and distilled the results of his research here. It is the best scholarly source available on the topic. Another excellent source is New Light on the Difficult Words of Jesus, by David Bivin (En-Gedi, 2005). This paperback is a little more readable than the huge volume by Safrai.

(Some may want to read my articles on some basic, related issues: “Can We Call Jesus ‘Rabbi’?” and “Can We Use Jewish Sources to Study Jesus?“)