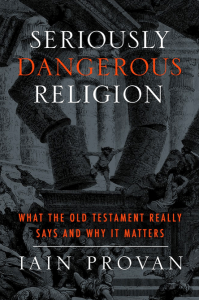 The subtitle is “What the Old Testament Really Says and Why it Matters.” In it he traces out the biblical story as told by the Tanakh/ Old Testament, showing what made it truly transformational in the ancient world.

Provan wrote it to respond to critics of biblical monotheism. A growing sentiment is that the story of the Bible as a whole has alienated believers “…from each other, from other peoples, and especially from their fellow creatures and our common home, the earth. The telling of its story has continued to do damage down through the ages, precipitating violence, war and ecological disaster.”

Provan is talking about viewpoints like that of Richard Dawkins, who writes,

“The God of the Old Testament is arguably the most unpleasant character in all fiction: jealous and proud of it; a petty, unjust, unforgiving control-freak; a vindictive, bloodthirsty ethnic cleanser; a misogynistic, homophobic, racist, infanticidal, genocidal, filicidal, pestilential, megalomaniacal, sadomasochistic, capriciously malevolent bully.” – The God Delusion

Ouch! These kind of accusations have been around for a long time, that the God of the biblical story is horrifying and needs to be replaced. Christians who only study the New Testament and are ignorant of the Old Testament have little defense, and more and more I even hear them say the same thing.

One of the most exciting things I’ve ever learned as I’ve studied the biblical context was that the Torah and Hebrew Scriptures were indeed transformational in their time. Their portrayal of a compassionate God who loves humans was stunning and unparalleled in the ancient world. Their humanitarian ethics were radical, and still are the bedrock of civilization today. The New Testament builds on these wonderful ideas and brings them to new heights.

This is exactly what Provan discusses in his book. Using only the Hebrew Scriptures he works through several big questions, like,

Then he compares the biblical answer to that of other major religions in the ancient and modern world. In his last chapters he looks at how the New Testament expands on these same issues.

Provan’s writing is accessible and friendly, unhindered by scholarly stuffiness. I’m extra impressed by that fact because he has a massive knowledge of world religions and his book overflows with delightful insights from Hebrew language and culture.

I have not yet finished Provan’s book, but I highly recommend it from what I’ve read so far.

For more on ancient ethics, see my recent article, ISIS, Ancient Violence, and the Torah’s Radical Response. I also discussed this in chapter 11 of Sitting at the Feet of Rabbi Jesus, “Touching the Rabbi’s Fringe.”

To see other books I’ve recommended, check out this list of posts.

Postscript: Some of you may be fans of John Walton’s books on the Old Testament. I just noticed that Walton actually posted a review of Seriously Dangerous Religion on Amazon which was quite glowing: “This is an incredible book. Provan is a senior scholar of superb reputation. He is extremely erudite and well-read, and an excellent thinker and writer… This book is worth your time and will pay untold dividends to the careful reader.”