Most of us are absolutely stunned by the brutality of ISIS, the Muslim extremist group. The grisly beheading of the news reporter, James Foley is too horrifying for words. 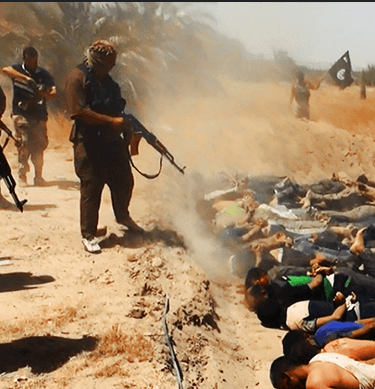 With this in mind, I’d like to point you to Stuart Dauermann’s article, ISIS: Something Wicked This Way Comes. He points out that this nightmarish wave of violence is very reminiscent of the appalling history of the Assyrians who once lived here. He comments,

Terrorism is not an Islamic invention. In the region, it is thousands of years old. By terrorism I mean the use of gruesome violence upon one’s enemies as a means of terrifying and subjugating those who survive. It is horrifying in the extreme, and it is meant to be so.

The Assyrians were reviled for their cruelty by surrounding nations. Numerous accounts of Assyrian torture have been found in the archaeological record. (Warning: very graphic.) 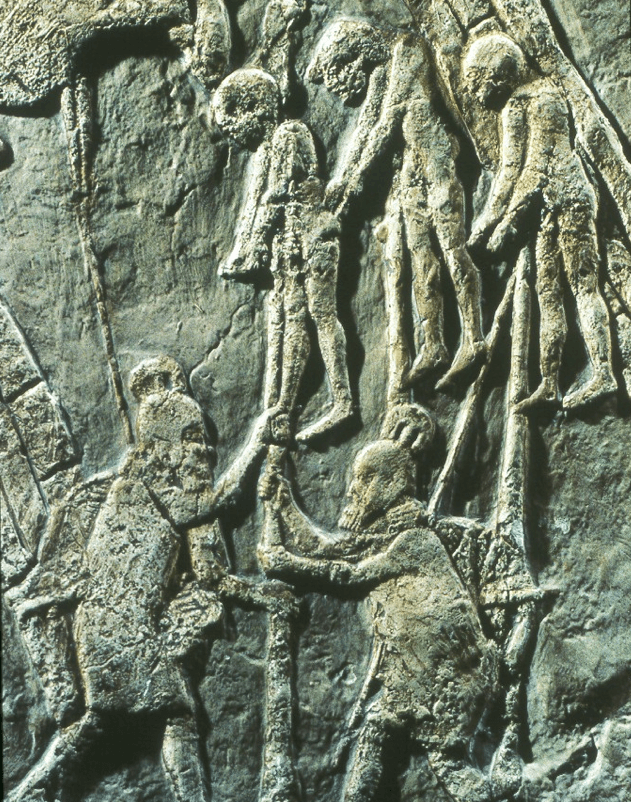 Still today you can see the monumental carvings from King Sennacherib’s palace in Ninevah that depict captives being flayed alive or impaled alive on spikes. When God sent Jonah to tell Ninevah to repent of its wickedness, you can see why the prophet ran the other way.

Ancient Assyria was truly breathtaking. But believe it or not, you also find horrific scenes decorating the palaces and tombs of Egypt. In them piles of human heads, penises and tongues were laid before Pharaoh to celebrate the subjugation of his enemies.

It’s tempting to think that gory images were just legendary fictions. But in recent years, researchers have been concluding that violence was far from uncommon in the ancient world. When they examine human remains, they find a shockingly high rate of evidence of death by homicide. In some tribal societies, your chance of dying a violent death was 1 out of 6.(1)

This finding has rocked the humanities, which has long has believed in the idea of the “noble savage” — that humans once lived at harmony with each other and nature until they were corrupted by European conquerors and modern institutions. It sounds like Genesis 6:11 was much more accurate:

The earth was corrupt in God’s sight and full of violence.

Keeping ancient violence in mind helps us see the context of the early history of Israel, which is full of war and slavery. Certainly some societies were more peaceful than others. But when we see atrocities like we’ve seen on the news recently, we start to realize why God could have grieved the fact that he even created humankind.

A Radical Idea in the Torah

As a whole, life was incredibly cheap in ancient times, and Near Eastern law codes reflected this fact.

Imagine this scenario: A man is leading his ox across a river when he is attacked and murdered by another man, who steals his ox. What’s the penalty? Among the Hittites, the murderer would be expected to join the victims clan and do the work the victim was doing. The actual loss of life meant nothing. 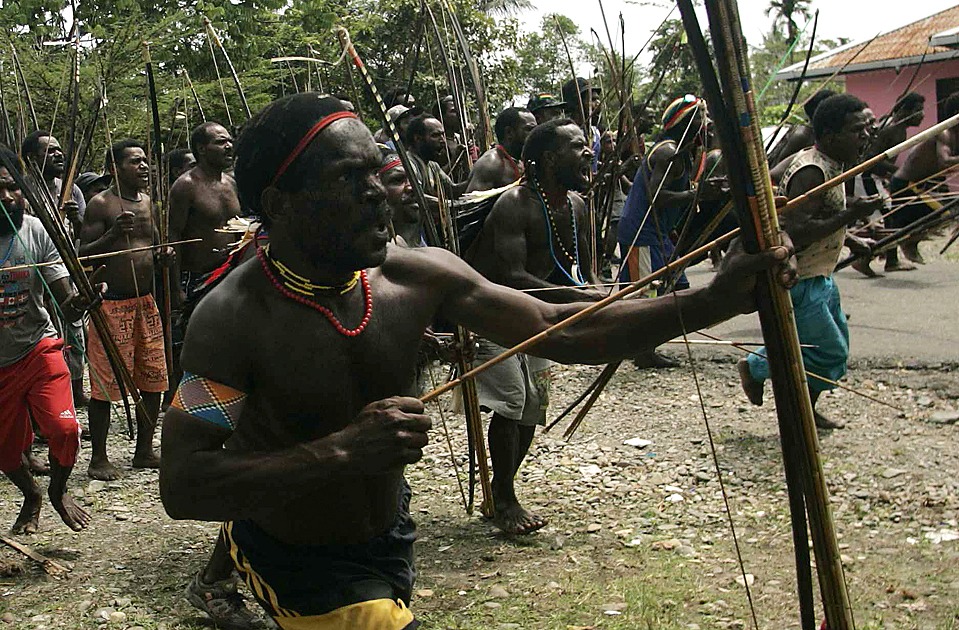 Similarly, in the ancient world, murder was considered a debt between two clans that could be paid off with a sum of money. Or, in some law codes, the murderer could give one of the people they “owned” in exchange, like a wife, a son, or a slave. Or a few camels, sheep or cows.

According to the renowned scholar Moshe Greenberg, this is where the laws of Israel fundamentally diverge from those of other nations. In Israel, murder was seen as an offense against God himself. Because humans were created in the image of God, we bear immense value to him. No amount of money could be exchanged for a life, because nothing could compensate for murder except for the life of the murderer himself. Many of Israel’s laws were based on the peculiar and supreme value that God placed on human life. (2)

Notice, though, that capital punishment is not murder, in biblical thinking. One is wanton, malicious violence, the other is a penalty demanded by God for a heinous crime. Humanity is precious to God, but life is not so supreme that even justice cannot demand it.

The idea that human life is uniquely precious to God was radical, unparalleled. To us it is second nature, but this was a shocking idea in the ancient world. Notably, the place that God first makes this declaration is immediately after the judgment of Noah’s exceedingly violent generation:

From each man, too, I will demand an accounting for the life of his fellow man. Whoever sheds the blood of man, by man shall his blood be shed; for in the image of God has God made man. (Genesis 9:5-6)

They Do not Know the Name of Humanity

I was reminded of all these things just a couple days ago, when the king of Saudi Arabia warned that ISIS would soon threaten America and Europe if this dangerous movement was not stopped. (3)

Look at the wording of the king’s statement:

These terrorists do not know the name of humanity and you have witnessed them severing heads and giving them to children to walk with in the street.

The terrorists “do not know the name of humanity.” The king is using the word “name” metaphorically (as Hebrew often does) to mean “renown, honor, dignity.” He’s declaring that the terrorists have no regard for the preciousness of life. They’re filled with the violence that grieves God to his very core.

Jews, Christians and moderate Muslims all know this fundamental principle that is the very heart of the Torah. God was speaking this truth into a very harsh world, and the Torah’s laws were addressing the situation of the time.

The sanctity of human life is such a part of the bedrock of our thinking that we can hardly imagine a world without it. Our society and our laws have been utterly transformed by it.

In America, we live in a peaceful society that puts tremendous value on our lives. As a result, many of us have become so tenderhearted that we recoil at any mention of violence in the Scriptures.

Ironically, some even suspect that the God of the Torah evolved out of primitive, pagan beliefs in warlike gods, and that over time our concept of God “matured” into the loving God of the New Testament. (4)

But look at the news footage of ISIS and imagine the brutal reality of the ancient world. Could the anger of the God that we see in the Scriptures actually be out love for his precious children who bear his image?

(1) For more, see Steven Pinker’s  The Better Angels of Our Nature: Why Violence Has Declined. Or, see Iain Provan’s Convenient Myths: The Axial Age, Dark Green Religion, and the World that Never Was. For a quick summary, read Pinker’s online article “The History of Violence” or watch his TED Talk on the subject.

(2) Moshe Greenberg, “Some Postulates of Biblical Criminal Law” in Essential Papers on Israel and the Ancient Near East. This classic paper has been reprinted again and again. You can read much of it at this link at Google Books—see pages 340-344, especially.

(4) This is what is called the “history of religions” theory, which assumes that the God we find in the Bible emerged out of the human imagination, gradually evolving from Israel’s angry primitive tribal deity into the peaceful, loving God of the New Testament. (Some give it a nicer spin, that the Holy Spirit was inspiring a gradual “reimagining” of God over time.) This is Rob Bell’s message in The God’s Aren’t Angry and his latest book, What is the Bible.

Jewish scholars protest against the Marcionism inherent in this approach, the idea that the OT God is primitive compared to the loving NT God. More importantly, they point out that this thinking fails to consider the depravity of human evil. It does not grasp how God’s passionate love for mankind is expressed in his grief at human violence and his outrage at oppression and suffering. See Abraham Heschel’s The Prophets, pages 354-390. Also, see my article, “Mr. Spock’s God: The Mistake of Western Theology.“