When Jesus entered Jerusalem and made his rightful claim to be the Messianic King, he set into motion the events that he knew would lead to his death.

He was wildly popular with the people, which caused the religious leaders to fear that all the people would follow him (John 11:48). They were obligated to squash all rebellion and keep the peace so that the Romans would allow them to keep their positions of power.

Moreover, by challenging the corrupt Temple “racket” of the house of Annas, Jesus was bringing the wrath of the powerful priestly syndicate down on his head.

The religious leaders couldn’t touch him when he was surrounded by large crowds of followers, but they wanted to end his life. They needed someone who knew how to find him at night when he was in his secluded camp outside the city, away from the crowds.

Choosing the night of Passover was a perfect scheme, because every religious Jew would be celebrating the Passover meal that started at sundown. The feast usually continued late into the night, and most people would immediately go to bed after having a large meal with several cups of wine.

The streets would be deserted of the throngs that had come for the feast, and it would be easy for Judas to lead the soldiers to where they could seize Jesus. The arrest and trial of Jesus occurred in the wee hours when the whole city was asleep, except for Jesus’ enemies who needed to convict him before the crowds heard about it. 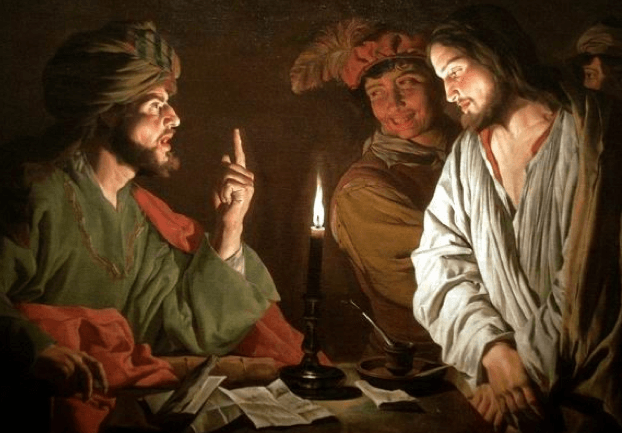 Who Rejected Jesus, and Who Didn’t?

An important conclusion for us is that the people who called for Jesus’ crucifixion were not the same crowd as those who hailed him as Messiah the week before!

The council that met at such a late hour on a major holiday for a hasty conviction was certainly not the seventy elders of the Sanhedrin, but a quickly assembled group of sympathizers. The mob that gathered early in the morning to shout “crucify” consisted of the Sadducean priests, the elders and their supporters. They were the ones who demanded that Jesus be crucified and Barabbas released, because Jesus had offended them by denouncing their corruption.

Later, at the time of the first Temple service of the day, large crowds fill the streets, only now discovering that Jesus has already been condemned to death (Luke 23:27). They were the ones who follow him to the cross and mourn for his death. Those who taunted him were the priests and Roman soldiers. Jesus was as popular with the masses at his death as he was one week earlier!

Historically, the stories of Jesus’ Passion have been read with the understanding that the Jews as a whole were acting together to destroy Jesus. One cause is John’s account, which frequently uses the term “the Jews,” which we assume refers to the whole nation. More likely, as a Jew himself, John was speaking of the Jewish leaders who opposed Jesus, or perhaps the “Judeans”­— the Jews living in and around Jerusalem who rejected the Galilean rabbi.1 John also described Jesus’ enormous popularity that caused the priests to fear that the whole nation would believe in him (John 11:48), and mentions that many even among the leaders believed in him! (John 12:42)

By knowing more about the issues and populations within first century Judaism, we can see that those responsible for his death were a few of those in power who saw his kingship as a threat to their own corrupt empires.

Jesus’ Messianic movement was far from rejected by the Jews. Fifty days after Jesus’ resurrection, on Pentecost, three thousand people became believers. Soon, tens of thousands of Jews would believe, according to Acts 21:20. One Jewish scholar believes that as many as 50,000 people, including Pharisees and priests, became believers. This was a substantial proportion of Jerusalem’s population of that time, suggesting that a large Jewish movement became the foundation of the early church.2

We should therefore read the words in the New Testament about the “Jewish rejection of Jesus” as wondering why every single Jew did not believe in him, rather than that the people as a whole rejected him. Within a hundred years the church would become largely Gentile, but the early church was almost entirely Jewish for several years.

2 Shmuel Safrai, as quoted by Dwight Pryor in the lecture series, Misconceptions about Jesus and the Passover (available at JCstudies.com).