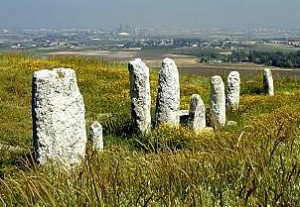 If you’ve ever taken a study trip to Israel, one of the first sites you may have seen was Gezer, only a few miles from the airport in Tel Aviv. There you will find a group of ancient standing stones (matzebot in Hebrew) that date from 1500 BC, when the Canaanites were in the land of Israel. They were part of the ancient practice of erecting stone pillars at pagan worship sites, and were often involved in worship of heavenly bodies.

The practice dates from at least 5000 BC. Many sacred stone sites from 3000 BC and older can still be found in the Negev and Sinai desert, as well as around Europe and elsewhere. Stonehenge, from around 2500 BC, is another example.

In theory, the pillar monument at Gezer should not be standing right now. God gave the Israelites explicit instructions to destroy all of the pagan standing stones in Israel:

“Break down their altars, smash their sacred stones (matzebot) and burn their Asherah poles in the fire; cut down the idols of their gods and wipe out their names from those places.” (Deuteronomy 12:3)

But Gezer was a very strategic city and only rarely were Israelite kings in control of it (Judges 1:29, 1 Kings 9:16). So during very little of Israel’s ancient history could they have knocked down the stones of Gezer.

Interestingly, Jacob used this same practice to worship God after he had the vision of the heavenly staircase. There he erected a stone, anointed it, dedicated it to God and called it Bethel (Genesis 28:18-28).

Even more surprisingly, after the Israelites crossed the Jordan, God himself commanded them to set up twelve stones to be a memorial to the miracle God did there. The text says,

How ironic it is that God used the same practice usually meant for idolatry to show his glory to the world, so that through the generations people would stop and remember what God did there. Otherwise, God forbade standing stones. He commanded, “You shall not set up for yourself a sacred pillar, which the LORD your God hates.” (Deuteronomy 16:22)

Why? The difference was the motivation – whether the stones were set up to point people toward God, or to worship idols.

With the bronze serpent, the same situation happens, but in reverse. When the Israelites were bitten by snakes in the desert, God commanded that a bronze serpent be hung on a pole. The people who looked at it in faith would live (Numbers 21:9). But later in history, the bronze snake became an idol, so it had to be destroyed (2 Kings 18:4).

You might think that if God commanded a worship practice, it would be permanently holy. But the fact that its origins came from God didn’t sanctify it when it was being misused. Once again, the motivation of the people, not the origins, determined whether something was idolatrous or God-honoring. 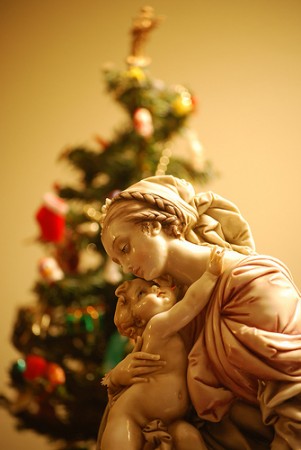 These biblical examples can give us wisdom about the holidays of Christmas and Easter. These holidays began as Christians decided to worship the true God on days when pagan gods used to be worshiped. Some traditions, like the Christmas tree and the Easter egg, once had pagan meanings that are now lost. Over time they’ve become holiday traditions, although they have no significance in worship. Should we avoid these observances?

There are some people who have rejected Christmas and Easter entirely because of their origins. But the biblical examples of the standing stone and bronze serpent show that the critical thing is not what the origin of a practice are, but whether we are worshiping the one true God.

To most Christians, these holidays glorify God like the standing stones by the Jordan did. They are a continual reminder of the wonderful thing God has done by sending the promised Messiah, who saved us by suffering and dying for our sins.