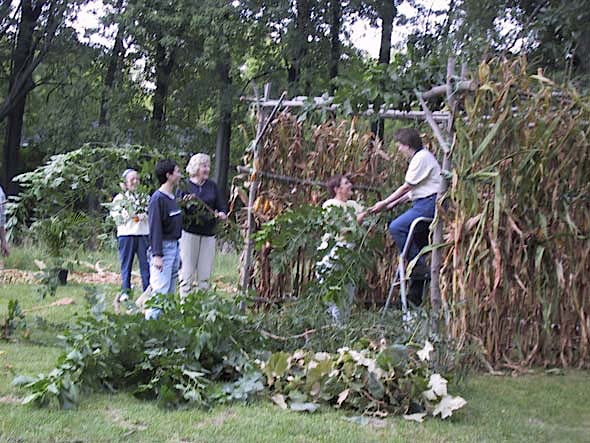 Five days after the Day of Atonement comes the most joyous feast of the year—the Feast of Tabernacles, or Sukkot. Sukkot is the plural of the Hebrew word sukkah, meaning “booth” or “hut.” During Jesus’ day, huge celebrations were held in the temple, lasting for seven days.

The Feast of Sukkot is also called the “Feast of Ingathering” because it is the greatest harvest feast of the year—when the fruit was brought in and the rest of the wheat was harvested. When the feast was inaugurated, God told his people to build booths and live in them for seven days in order to remember how he had brought them out of Egypt and cared for them in the desert.

To this day, many Jews observe the tradition of building a sukkah. These are supposed to be made from impermanent materials, fashioned so that at least one star is visible through the branches that comprise the roof. The custom is to live in it if possible, or at least to eat your meals in it as if it were your home.

As you sit in one of these rickety little booths, peeking up at the sky through the branches and feeling the wind blowing through the walls, you realize that security comes not from the walls you construct around yourself, but from the Lord who protects you.

You also begin to realize the abundance of God’s blessings. The Feast of Sukkot offers a potent experience of what following God is like—feeling both insecure and incredibly blessed at the same time. For Jews, it is a time of great joy as they remember the intimacy of those forty years when God “tabernacled” with them in the desert, sustaining them each day with manna from heaven.

Experiencing Life in a Rickety Tent

Lois recalls when her friends Bruce and Mary Okkema built a sukkah in her backyard along with their Bible study group. “Bruce and I,” she says, “were busy preparing for a huge worship celebration, a kick-off event for our new ministry, the En-Gedi Resource Center. I’ll never forget that brilliant September morning when we drove over to a local radio station to be interviewed about the event. Suddenly, in the middle of the interview, a DJ popped his head into the studio and said: ‘We’re going to need to break in for a news bulletin about a plane accident in New York.’

The World Trade Center had just been struck. Our ministry had barely begun when the events of September 11 threatened to sink it. The events of that day paralyzed our country. So many lives were lost that the nation was plunged into mourning. And there was mounting fear that more terrorist attacks would follow. 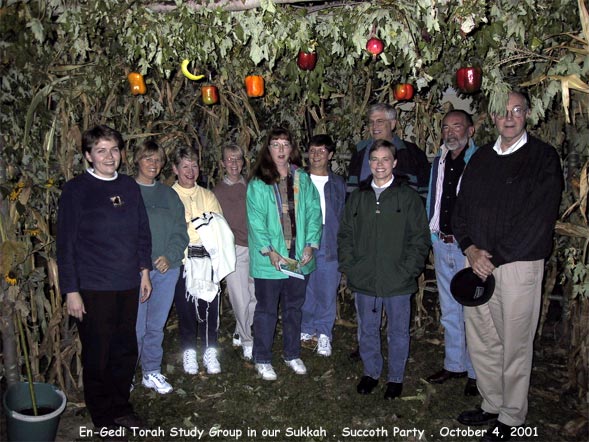 In the ensuing months, Bruce’s business was hard hit by a faltering economy, as were many others. As for myself, I had left a tenure-track professorship to help begin the ministry, confident that people would support us. That fall the strong brick walls of my cozy little house felt as shaky and breezy as the walls of the sukkah in my backyard. Those first years with En-Gedi were truly a ‘journey through the wilderness,’ as we began to discover what it meant to rely on God for our security.”

Israel’s own journey through the wilderness is brought vividly to mind every summer. For six months, between May and October, not a drop of rain falls, so that by mid-fall, when the Feast of Sukkot is observed, the land is parched and dry. The lush spring greenery has shriveled and died.

No wonder, then, that Sukkot was the time to pray that God would send “living water,” or rain, for the coming year. About one out of four years, the rains were late or not plentiful enough for good yields, so rain was a critical need and a common worry. At that time of year, it was easy for people to remember how dependent on God they had been in the desert of Sinai.

How does the Feast of Tabernacles figure into the life of Jesus? On the last day of that feast, the priests performed a water libation ceremony accompanied by impassioned prayers for life-giving water in the form of rain. At that point the joyful voices of thousands of worshipers reached a thunderous intensity. One rabbi commented, “Anyone who has not seen Simchat Beit Hashoevah [the water drawing ceremony] has never seen joy in all of his life!”

It was on this last and greatest day of Sukkot that Jesus stood up in the midst of the clamorous crowds and shouted: “Let anyone who is thirsty come to me and drink. Whoever believes in me, as Scripture has said, rivers of living water will flow from within them” (John 7:37–38).

Imagine! Jesus was speaking of the living water of the Holy Spirit that he would soon pour out on new believers. This was the water that would fill up their thirst for God and bubble out of them to refresh the whole world. Through him God would give a never-ceasing supply of life-giving water, welling up in them from now until eternity.

Excerpt from Sitting at the Feet of Rabbi Jesus (Zondervan, 2009)