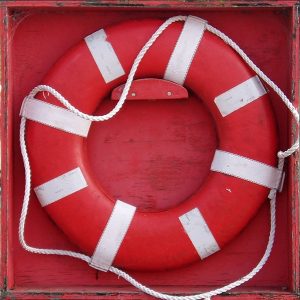 “Whoever saves a single life is considered by Scripture to have saved the whole world.” (Mishnah Sanhedrin 4:5)

This classic rabbinic line describes the fact that human life is greatly precious in the eyes of God. When Jesus healed on the Sabbath (Luke 6:9), he preached a similar idea that is well-known in Judaism — if a human life is in danger, almost all laws could be set aside for the reason of pikuach nephesh — to “save life.”1

With this in mind, I feel it’s imperative to talk to you about the COVID-19 situation, because it is a life or death issue right now. If you only know my writing on Jesus’ Jewish context, you might not be aware that my Ph.D. is actually in biology, and for several years I taught as a college professor. The skill I use in both careers is to dig into the primary data. I was originally trained to do this in the world of biology, but now I do this with the Bible and ancient texts.

I’m writing this because I am concerned for my readers (Americans, mainly) who are worn out by all the shouting headlines and feel like everything is over-hyped. They hate politicians, and the panic on social media makes them think people are losing their minds. The doomsday talk about COVID-19 doesn’t make sense to them, because it seems like a just a bad flu. People die of the flu every day! What is the big deal?

Let’s look at some data together.

What I wanted to do is to take a calm look at some data together with you, without any crazy headlines or political spin. I want to show you some basic details about what is going on. I’m not trying to sell you anything or change how you vote. My goal is for you to just see the situation for yourself.

Let’s look at what’s been going on with COVID-19 this past week in Michigan, where I live.

This doesn’t seem like much, in light of the hundreds of thousands of people who suffer from seasonal flu. Why all the concern? It’s because the trend in Michigan is the same as the rest of the world, where the number of cases is doubling every 3-4 days. See the image below from this data site. 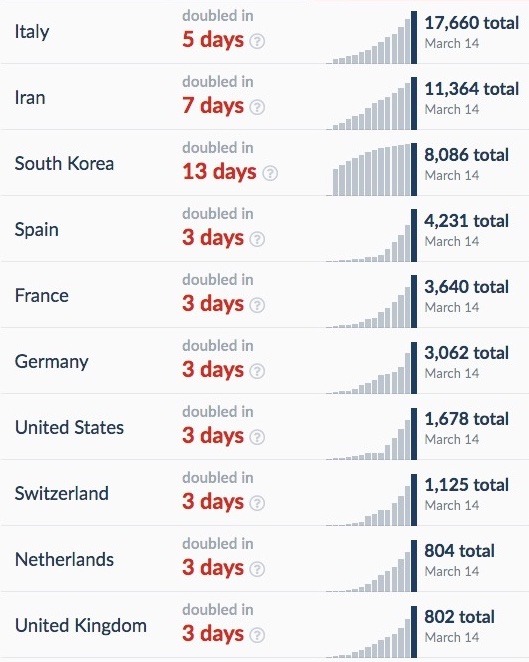 This is what is called an exponential increase. That means that the numbers start off very small but then compound over time, so that later the rate of increase grows enormous. This is happening because the Coronavirus is new and no one in the world is immune. Cases are growing exponentially and mostly unchecked.

If we have 33 cases in Michigan right now (3/14),* what will happen in the future? Let’s estimate from the data from other places. To do this I found data at the World Health Organization website at this link.

So, within a couple weeks, we can pretty much guess that Michigan will have at least 1000 cases, because this is what is happening everywhere else. What about two weeks after that? Let’s keep looking at the numbers.

Looking at these trends, Michigan could have 13,000 cases within a month. This is just a guestimate from reading the data, and I’m not an epidemiologist. But please note that I’m also not exaggerating or trying to mislead you, I’m just pointing out what the trends in the numbers look like from what has happened in other areas. The exponential growth is what is important, and I don’t think this is communicated very well by many sources. *But see note below (added 3/21/20)*

What’s happening is that each country initially has just a few people infected and thinks its no big deal. But within weeks they have thousands of very sick people and hospitals are overwhelmed.

My overall point is that while you hear a lot of breathlessly over-hyped reports in the news, the COVID-19 pandemic is a terribly serious situation that is growing worse by the day. I hope you are praying often about this.

The Exponential Curve is Key

Why am I writing about this topic instead of sticking to Jesus’ first century context? For two reasons. First, because to save a life is to save a world. I can’t just sit on the sidelines and let people be misled by media headlines. I feel like I am serving Christ by showing you what’s going on.

Second, there is a way to decrease the loss of life, and it involves you, my readers. If we can lower the overall spread of infection, (“flatten the curve“) by being extremely careful about spreading germs, hospitals will have longer to respond and not be overwhelmed by patients. People will receive better care, and, Lord willing, given some months time, new medications and even a vaccine can be developed. 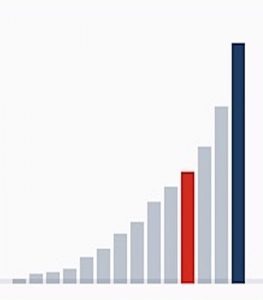 The key is that on an exponential curve, tiny changes early on make an enormous difference later. It is critical to get as many people as possible to change their behavior and do it quickly — to practice social distancing and not spread germs. Time is of the essence to change people’s behavior. That’s why governments are taking drastic steps that seem to be overreaching.

Because people don’t understand this, they are not changing their behavior, so the numbers are still increasing rapidly in many places. (See this article – “A Coronavirus Tale from Italy: Don’t Do What We Did.”)

Many people see it as a personal decision. They say to themselves, “We’ll keep grandma safe but if I catch it, I’ll just get over it.” (Which is often not true — it can be very serious.) But every person who catches it infects more and more people, which drives the numbers up exponentially.

What to do Today

Today is the day you can love your neighbor with every action you take. You don’t need to panic and go out and buy toilet paper and groceries — that’s foolish and useless. But stop spreading germs!

There is actually one more thing you can do that is even more urgent. You need to persuade your friends who see COVID-19 as a political stunt or as media over-hype that the situation is indeed serious. Don’t yell at them, just show them the numbers. Get them to realize they need to change their behavior as quickly as possible. Do this today!

And of course do not panic, but pray diligently. May the LORD have mercy on us all. 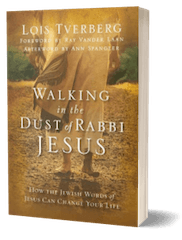 1 For more on pikuach nephesh, see my book Walking in the Dust of Rabbi Jesus (Zondervan, 2012), chapter 10, “Thinking with Both Hands.”

Update, 3/21/20: As of yesterday, a week after I told you that we had 33 cases, Michigan now has 787 cases and 6 deaths. We had our first reported case only 10 days ago. Here are the numbers for Michigan right now: 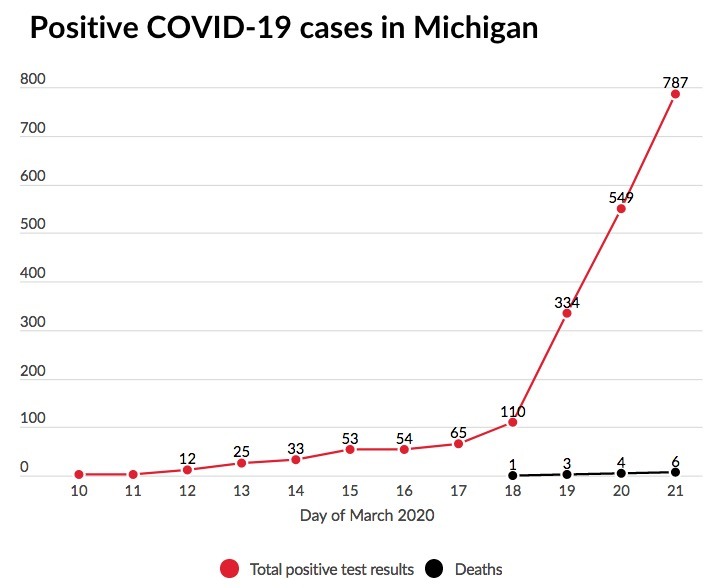 One reader noted that we actually don’t know the exact numbers of cases because we haven’t done much testing. The increase that you see above is somewhat distorted by the fact that once testing begins, more cases are found. Very true. My point wasn’t to do math, but to show you that the pattern we are seeing in Michigan is happening everywhere on the planet. First a few cases turn up, then a few weeks later the numbers rise astronomically and then deaths after that. (See this article for more math.)

Also note, I am intentionally sharing only reported case numbers, not what is theorized, because many people aren’t convinced about how far widely COVID-19 has spread. The very problem I’m trying to address is the fact that theoretical numbers sound like hysterical speculation to the unconvinced, so many people have stopped listening. So I’m only sharing actual reported data, even though I know it isn’t complete.

Here are more articles that are must reads:

Young and Unafraid of the Corona Virus – Newsweek

Corona Virus – Why You Must Act Now – Medium –

Cancel Everything – The Atlantic

Another recommended read is chapter 13 in Deadliest Enemy: Our War Against Killer Germs, by Osterholm and Olshaker.

Michael Osterholm is an epidemiologist at the forefront of the field. Look for interviews where he explains what’s going on, like this one.

New: This video, called “Why Fighting the Coronavirus Depends on You” is very good.