Our modern, Western culture revolves around the individual. In the biblical world, family was everything. What does that actually mean though, in terms of how they thought? 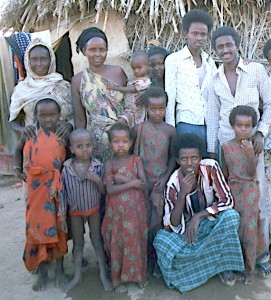 I found a fascinating description of this worldview in The Shadow of the Sun, by Ryszard Kapuscinski, as he describes the peoples he encounters throughout his travels in Africa. Listen to what he says about the traditional Somali:

The Somali is born somewhere on the road, in a shack-tent or directly under the open sky. He will not know his place of birth; it will not have been written down. Like his parents, he will have no village or town he calls home. He has but a single identity – it is determined by his ties to family, to the kinship group, to the clan.

When two strangers meet, they start by asking, “Who are you?” “I am Soba,” the first one begins, “from the family of Ahmad Abdullah, which belongs to the Mussa Arraye group, which is from the clan of Hasean Said, which is part of the larger Isaaq clan,” etc.

After this recitation, the second stranger gives the particulars of his lineage, his roots. The exchange lasts a long time and is immensely important, because both individuals are trying to determine whether something unites them or divides them, whether they should embrace or attack each other with knives.

Their personal rapport, their mutual sympathy or antipathy, have no meaning; their relationship, be it friendly or hostile, depends on the current state of affairs between their two clans. The human being, the singular, distinct person, does not exist – or he matters only as part of this or that bloodline.

We can’t automatically assume that Africans of today think the way biblical peoples did. But this perspective is much more common than you think. In many traditional cultures, the family is of supreme value.

And consider how often the Bible sounds as if it was written from that perspective, especially the Old Testament. The text overflows with “begats” because they were critical in the minds of its readers. And the narrative revolves around God’s covenant with Abraham’s family.

Take a moment to shift your mental perspective to that of the Somali. How does it make the Bible sound different to you? How does your own world look different through their eyes?