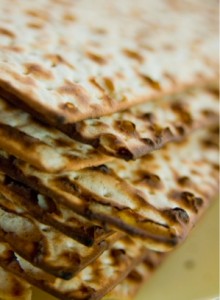 Yesterday night, Jews around the world sat down to celebrate the Passover Seder meal. At the same time, they also began the Feast of Unleavened Bread, which lasts seven days.

Still today Jewish people make a great effort to observe the commandment to remove all leaven from their homes and eat only unleavened food for one week. The house is scrupulously cleaned, and pots and sinks are boiled.

The last crumbs are ceremoniously collected with a feather and a spoon, and burnt in a little bonfire outside. The only bread that can be eaten for the next week is matzah: dry, flat, unleavened bread that has been carefully prepared to insure no fermentation occurs.

If you’re in Jerusalem at Passover, the city is transformed. Grocery stores block off all aisles containing leavened products, restaurants stop serving them. Even the animals go kosher for Passover – dog and cat food must be leaven-free. (More here.)

Tomorrow, Christians will celebrate Maundy Thursday, and remember Jesus’ last Passover Feast with his disciples. As we are approaching this time it is good to think about what God was saying through the images of Passover, especially the imagery of leaven. When Jesus held up the bread and said “This is my body,” he certainly would have been holding up matzah, because the Jews were required to eat the Passover with unleavened bread (Deut 16:1-3).

The Imagery of Leaven

What does leavening symbolize?  Believe it or not, the Bible actually gives multiple explanations.

Exodus 12:34 says that it’s to commemorate the Israelites’ rapid departure from Egypt, when they didn’t have time to let their bread rise. But in Deuteronomy 16:3, it’s called the “bread of affliction” and serves as a reminder of the misery of slavery. Unleavened bread is also traditionally understood as a picture of eating manna in the desert for forty years. 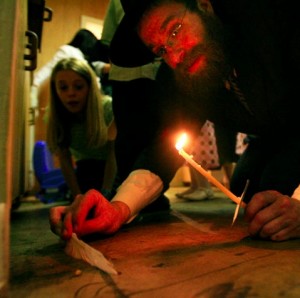 In a typically Hebraic fashion, the imagery of unleavened bread is multi-layered and paradoxical, symbolizing both bondage and freedom.

In the time of Jesus, leaven had gained even more significance. Unleavened bread is very flat and plain, and it was seen to represent humility, rather than being “puffed” up with pride. Because it is just wheat and water with no old, fermented leavened dough added, it represented purity too.

A person who was “unleavened” was like the character described in the beatitudes—meek and pure-hearted, aware of his own weaknesses, who comes to God honestly, without any pretense. In contrast, “leaven” was seen to be a picture of pride, boastfulness, hypocrisy, and being full of one’s self—the opposite of being “poor in spirit.” You can see why Jesus said that the “leaven” of the Pharisees is hypocrisy (Luke 12:1).

The imagery of leavening makes all the more sense when you know how leavening was done in ancient times, before the little “Red Star” packets came along.

Whenever grain or flour is allowed to get moist, within a few days it will acquire a sour taste and start to ferment because of microbes in the air that cause the grain to decay. Without steps taken to prevent it, this will always occur over time. Somewhere back in ancient history someone discovered that if you make dough while the grain is still edible and bake it, the acid and bubbles produced by microbes will add texture and flavor to bread. 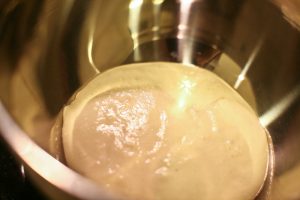 This normally takes days before this to occur naturally, but it can be hastened by inoculating the dough with an older lump of raw dough. (Sourdough breads today are still made this way today.) Over the days the lump of old dough would become sour and inedible, and if left longer it would become rancid and rotten. But yet it was mixed into a new batch of dough to cause it to rise.

In light of ancient bread-making, leavening becomes an even more potent image of a life contaminated by sin. The decay that leads to “death” or rottenness is added to each batch. Without it the dough tends to be sweet, but adding it would give the dough a slightly sour taste that would get stronger and stronger until it was baked.

Hmm… I can’t not think of how sin tends to “sour” our personalities, and also cause us to “puff up” with pride. Eventually, as Adam first found out, sin leads to our decay and death.

In light of this, we can appreciate all the more what Jesus meant when he held up the matzah at the Last Supper and said “This is my body.” He wasn’t just speaking about his body as bread in general, but as this specific kind of bread, made without leaven, unadulterated by decay. Unlike the rest of humanity who had been leavened with sin inherited from their fathers, he had not been infected with the “rottenness” that was in the rest of mankind.

When God prohibited his people centuries years earlier from eating leaven during Passover, he was thinking ahead to when Jesus would use the bread at the Passover meal to describe himself. Because he is not leavened with sin, he is a suitable sacrifice, and because he is not infected with decay, he is God’s Holy One who will not see decay and will live on eternally! (Psalm 16:10, Psalm 49:9, Acts 13:34-37).

Just knowing this one minor detail about Jesus’ Jewish context reveals multiple layers of meaning in his message. As we celebrate of Jesus’ death and victory on the cross the coming days, it is a fit time ponder what it means to let God cleanse our own lives of leavening. As Paul put it,

Don’t you know that a little yeast works through the whole batch of dough? Get rid of the old yeast that you may be a new batch without yeast – as you really are. For Christ, our Passover lamb, has been sacrificed. Therefore let us keep the Festival, not with the old yeast, the yeast of malice and wickedness, but with bread without yeast, the bread of sincerity and truth. 1 Corinthians 5:6-8

For more about Passover and its significance to Christians, see my book Sitting at the Feet of Rabbi Jesus (Zondervan, 2009), p 101-112. You can download this chapter in a free pdf called A Taste of Passover, along with instructions for a simple Passover Seder.

Two other very nice resources on the significance of the biblical feasts for Christians are:

A Family Guide to the Biblical Holidays by Robin Sampson

The Feasts Of The Lord by Kevin Howard