What does it mean to speak of Jesus as the “Christ”?

This word is one of the most important, basic words in a Christian’s vocabulary. But it isn’t until you dig into the Bible’s ancient context that you that see its surprising imagery and some of its most important implications.

First of all, the word “Christ” comes from christos, a Greek word meaning “anointed.”  It is the equivalent of the word mashiach, or Messiah, in Hebrew. So, to be the Christ, or Messiah, is to be “the anointed one of God.”

But what does that mean? 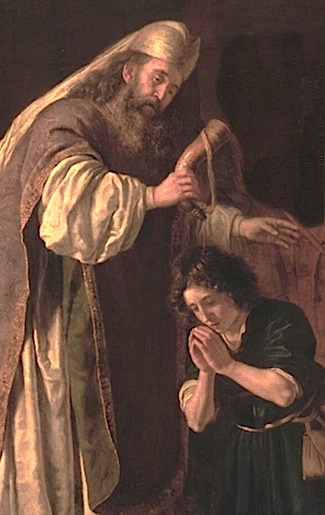 To be anointed, literally, is to have sacred oil poured on one’s head, because God has chosen the person for a special task. Priests and kings were anointed, and occasionally prophets. Kings were anointed during their coronation rather than receiving a crown.

Even though prophets and priests were anointed, the phrase “anointed one” or “the Lord’s anointed” was most often used to refer to a king. For instance, David used it many times to refer to King Saul, even when Saul was trying to murder David and David was on the verge of killing Saul to defend himself:

The overriding biblical imagery of the word “Messiah” or “Christ” is that of a king chosen by God. Often in the Old Testament, God would tell a prophet to go anoint someone and proclaim him king. The act of anointing with sacred oil emphasized that it was God himself who had ordained a person and given him authority to act as his representative.

I remember being quite surprised when I first learned this. If you would have asked me to describe Jesus’ identity, “Son of God” or “Suffering Savior” would have been my two best guesses. “King” didn’t even make the list. While Jesus also has a priestly and a prophetic role, the prominent idea within the title “Christ” is actually that of a king.

Hints of a Coming King

If you look more closely, you’ll see that this is indeed the messianic idea throughout the Bible. Throughout the Old Testament, we see little hints that God would send a great king to Israel who would someday rule the world. In Genesis, when Jacob blesses each of his sons and foretells his future, he says of Judah:

The scepter will not depart from Judah, nor the ruler’s staff from between his feet, until he comes to whom  it belongs and the obedience of the nations is his. (Genesis 49:10)

This is the first hint that they were expecting a great king to arise out of Israel who would be king over the whole earth.

The clearest prophecy about the future messianic king comes from King David’s time. David earnestly desired to build a temple, a “house” for God, but God responded that his son Solomon would be the one to build his temple. But then God went on to promise he would build a “house” for David, meaning that God would establish his family line after him. He further promised that from David’s family would come a king whose kingdom will have no end:

When your days are over and you  go to be with your fathers, I will raise up your offspring to succeed  you, one of your own sons, and I will establish his kingdom. He is the one who will build a house for me, and I will establish his throne forever. I will be his father, and he will be my son. I will never take my love away from him, as I took it away from your predecessor. I will set him over my house and my kingdom forever; his throne will be established forever. (1 Chronicles 17:11-14)

This prophecy has been understood as having a double fulfillment. It is first fulfilled in Solomon, who built the temple, but did what God forbade—amassed a great fortune and married foreign wives. His kingdom broke apart a few years after his death. But this prophecy looks forward to a “Son of David” who would come, who would have a kingdom without end. This, in fact, is the seedbed of all of the messianic prophecies that speak of the “son of David” and the coming messianic king.

Jesus as the Christ

Often the gospels use cultural images of kingship to proclaim Jesus as the Christ, God’s anointed King who has come. When a king arose with great power, other kingdoms would send emissaries with lavish gifts to establish a friendly relationship with the future leader. This is what is happening in Matthew 2, when wise men come to bring gifts to Christ, the newborn king whose star they have seen in the east.

This was a fulfillment of  Numbers 24:17, Isaiah 60, and Psalm 72. The latter two passages both describe the coming of a great king and describe how representatives from nations everywhere would come to give him tribute:

The kings of Tarshish and of distant shores will bring tribute to him; the kings of Sheba and Seba will present him gifts. All kings will bow down to him and all nations will serve him. Psalm 72: 10-11

We see yet another picture of Jesus as King when he rode on a donkey into Jerusalem. This was often part of the annunciation of a new king, as it was for Solomon in 1 Kings 1:38-39. It is the fulfillment of Zechariah 9:9, the triumphal entry of the messianic king.

Rejoice greatly, O daughter  of Zion! Shout, O daughter of Jerusalem! Behold, your king is coming to you! He is just and endowed with salvation; humble, and mounted on a donkey, on a colt, the foal of a donkey.

And, during Jesus’ trial, the main question that he is asked is “Are you the King of the Jews?”, which he answered affirmatively:

And they began to accuse him, saying, “We found this man misleading our nation and forbidding to pay  taxes to Caesar, and saying that he himself is Christ, a King.”  So Pilate asked him, saying, “Are You the King of the Jews?” And he answered him and said, “It is as you say.” (Luke 23:2-3)

What are the implications of Jesus as King?

When you think about Jesus’ time on earth, the last thing you may think of is of a reigning king. But Jesus explained that his kingdom was not of this world (John 18:37). Rather, Jesus was talking about the kingdom of God, the major focus of his preaching. The kingdom of God is made up of those who submit their lives to God to reign over them. 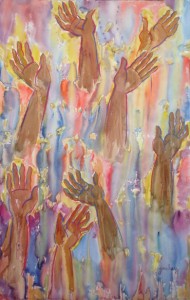 As the King that God has sent, and of course because he is God, the kingdom of God is Jesus’ kingdom. He speaks about how it is expanding like yeast or mustard seed as the news goes forth that he has arrived and people accept him as King. When he returns in glory, every knee on earth will bow to honor him as King (Philippians 2:9).

Did the people around him see him as a king?  The fact that Jesus’ disciples and others who believed in him referred to him as “Lord” suggests that they were giving him great honor, with the understanding that he was the Messianic King. To call Jesus “Lord” was to use a term for addressing royalty, like saying “Your Majesty” or “Your Highness.” It is also a common term for addressing God himself, and hints of worshiping Jesus as  God.

To use the word “Lord” displays  an attitude of obedient submission to a greater power. Jesus seems even to expect that those who call him Lord obey him. To his listeners he asked, “Why do you call Me, ‘Lord, Lord,’ and do not do what I say?” (Luke 6:46). To call him “Lord” or to call him Jesus “Christ” is to say that he is the King that God has sent who has a right to reign over us.

This has implications about how we define ourselves as Christians. Usually, we talk in terms of doctrines and beliefs, but the very word “Christ” calls us to more than assenting to a creed. If Christ means King, a Christian is one who considers Jesus his Lord and King, and submits to his reign.

Paul too proclaims that salvation comes through faith in the atoning work of Jesus, as well as a commitment to honor him as one’s personal Lord and King:

If you confess with your mouth Jesus as Lord, and believe in your heart that God raised him from the dead, you will be saved. (Romans 10:9)

Can We Call Jesus “Rabbi”?
Hearing Jesus Through A Disciple’s Ears
The Meaning of Life, According to Jesus